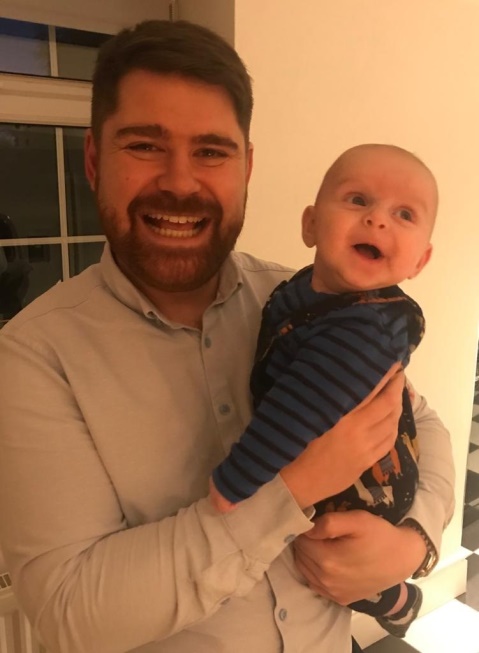 Meet Bobby Bahadori, a new father we spoke to in advance of Safer Sleep Week, to understand the importance of Safer Sleep guidance and the challenges parenthood brings to new parents and their extended families, who are finding their feet when welcoming their first child.

Bobby was kind enough to speak to us about his experience with being a first time dad, and the support his family received during those first few months.

Congratulations on welcoming your first child!

It’s quite overwhelming, it’s something that takes up a lot of your thoughts beforehand and then when it comes - it takes up all of your time. There are some big highs and lows that come with it, especially when it comes to the first few weeks, when you're trying to get over the tiredness and adjust properly.

You mentioned being tired and that’s understandable, but would you say that’s one of the main challenges of being a new father? Were there any other big challenges or things you didn’t expect?

Yeah, I suppose the reality of having to take care of someone else for 24 hours a day and the overall responsibility of it all. I think that shocks you a little bit and, even though you know it's coming, but until you're actually living it, I don’t think you can quite comprehend it. It’s something that you have to spend all of your time on, between you and your wife, you think about it every hour of the day.

On the other hand, what are the pleasures of being a father and what surprised you positively?

That’s lovely, and who would you say, throughout this journey, have been your main source of support to you and your partner?

We very much relied on my parents in law, my brother has two kids as well and then my sister had a baby a couple of weeks before us, so they were a couple of weeks ahead of us. It was very much a case of checking in and constantly asking questions over WhatsApp.

We have also been quite lucky with our parenting groups as well and stayed in touch using WhatsApp again. My wife has fond these groups very useful speaking to the other mothers, going to classes with them too.

It's very much family and friends, especially those who have recently been through it, who are the people we've relied on the most, and the routine health visitors were also good.

Do you feel, before the birth and after the birth, that you were well informed about Safer Sleep and the risks of Sudden Infant Death Syndrome?

I’d say mildly. I think it came up a little bit at parenting classes; we were against co-sleeping from the beginning and knew things like the importance of not falling asleep whilst you're looking after your baby. However, I don’t think they went into great detail on exactly why you shouldn’t do it. It was just briefly touched upon. When you go into the full details and learn what could happen, I think it’s so important that this should be fully explained to parents and why the work you’re doing is vital in spreading the message.

Did you do any of your own research into that?

We did a little bit and again we’re quite lucky my sister-in-law is a Health Visitor, so she was quite keen to show us certain things and what to do. But I think on the whole, I wasn’t fully aware of it, and I don’t think that there is as much information out there as there should be. I think it would especially be better for expecting fathers, who maybe don’t receive every piece of information.

For her, having to do the most traumatic/exhausting thing she's ever done and then not be able to sleep afterwards was a massive shock to the system.Especially after a 36 hour birth, I just don’t think we got a good amount of time to adjust after that and get some sleep, which was the scary thing. We had never been as exhausted in our entire lives and you’ve got to look after a baby who sleeps for an hour at a time. You need to make sure you're feeding them and that was definitely the biggest shock of everything.

I can imagine. Are there any key things that you were told to avoid? Anything that maybe sticks in your mind from your classes?

Yeah, just making sure you don’t fall asleep when you're holding the baby on the couch or in the bed. I suppose we were quite worried when my wife was breastfeeding; that was always an issue as we were worried she could fall asleep in the middle of the night when she was breastfeeding. It got to the point that, at times, I made sure I stayed awake at the same time so I could make sure he was still safe.

Overall, it was time management with it really. As much as you want to be together with the baby at first, you kind of have to take your sleep whenever you can get it. Even if just doings a couple of hours at a time. And of course, relying on family - my mother in law was brilliant.

In the first few days, I think that people don’t want to come round and smother you, but my mother-in-law was a massive help in that regard to just come and take the baby for an hour so that we could both sleep. I think that was a massive help. I think sometimes people think you want to be alone with the baby which sometimes can be the case, but we hugely relied on this support and that was a really good thing for us.

It's great that you had family support. Why do you feel like it’s important for the Safer Sleep advice to go out, not only to the parents, but also to the wider family members?

It’s simple, the risks are huge. It's ultimately what no one wants to happen, so if people can be as better educated as possible, I think that can only help and have a good effect on these rates. Being as prepared as possible  for everyone who may take care the baby, not just the mother. Also the importance of wider family helping out so we can only avoid the unthinkable.

With over 88% of SIDS cases happening in the first 6 months of life, it is just as important as ever to spread the important Safer Sleep message and increasing awareness within the region. To access safer sleep advice and support, visit the Lullaby Trust website here.